Constitution of the Republic of Uzbekistan 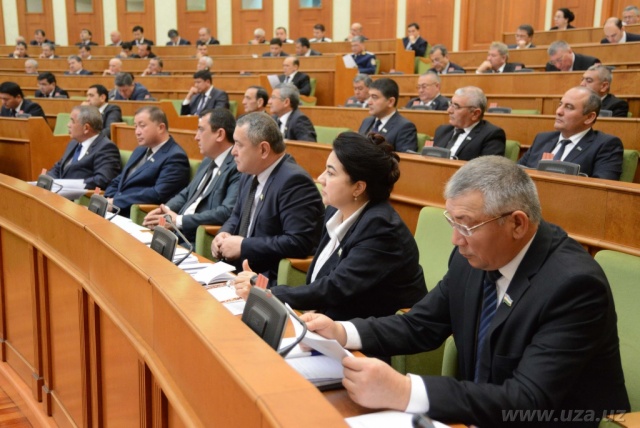 The fourth plenary session of the Senate of the Oliy Majlis of the Republic of Uzbekistan continued its work on 4 December 2015 in Tashkent.

During the session, the senators considered the Law “On introducing amendments and additions to some legal acts of the Republic of Uzbekistan”.

The senators noted the particular significance of the amendments and additions, directed towards increasing the role of political parties in organizing legislative, controlling and analytical activity of the Legislative Chamber. In particular, mandatory consultation with the party groups in each stage of considering draft laws as well as preliminary discussion of the report on execution of the State budget by party groups has been legally secured.

The rights of the opposition party groups on introducing alternative draft laws have been specified and broadened.

Several norms on further democratization, raising the efficiency of legislative process are included in this law. In particular, in order to organize all-round elaboration of legal acts, consider other issues under the competence of the Oliy Majlis, a precise order of establishing expert groups under the Committees of chambers of the Parliaments, consisting of specialists of government bodies, scientific and educational institutions, representatives of nongovernmental and noncommercial organizations with experience in specific spheres. Mandatory invitation of representatives of civil society institutions during consideration of socially and publicly significant issues draft laws.

In order to implement constitutional norms, directed towards strengthening parliamentary control over the activity of state executive bodies, the order of hearing of annual reports of the government, reports of heads state management bodies on implementing the legal requirements, state programs in relevant areas of socio-economic development, on adopting by-laws, related to implementation of the Laws and others are clearly defined in the Laws on regulations of chambers of the Parliament.

Aiming to implement amendments to the Constitution on further increasing autonomy and accountability of the government, the powers of the Cabinet of Ministers are more clearly defined in a relevant Law, which, according to the senators, will promote further democratization, raising the effectiveness of the executive power system, activity of state management bodies.

During the session amendments and additions to the legislative act, regulating corporate management sphere. In relation to adoption of the Decree of the President of the Republic of Uzbekistan “On measures to introduce modern methods of corporate management in joint-stock companies” dated from 24 April 2015, amendments and additions to the Laws of the Republic of Uzbekistan “On joint-stock companies and protection of the rights of shareholders”, “On guarantees of freedom of entrepreneurial activity”, “On insurance activity”, and other legal acts have been adopted.

Further, the senators considers the issues of making changes to the composition of the Constitutional Court and the Supreme Court of the Republic of Uzbekistan.

In total, during the fourth plenary session of the Senate 15 issues, including 7 laws, have been considered.